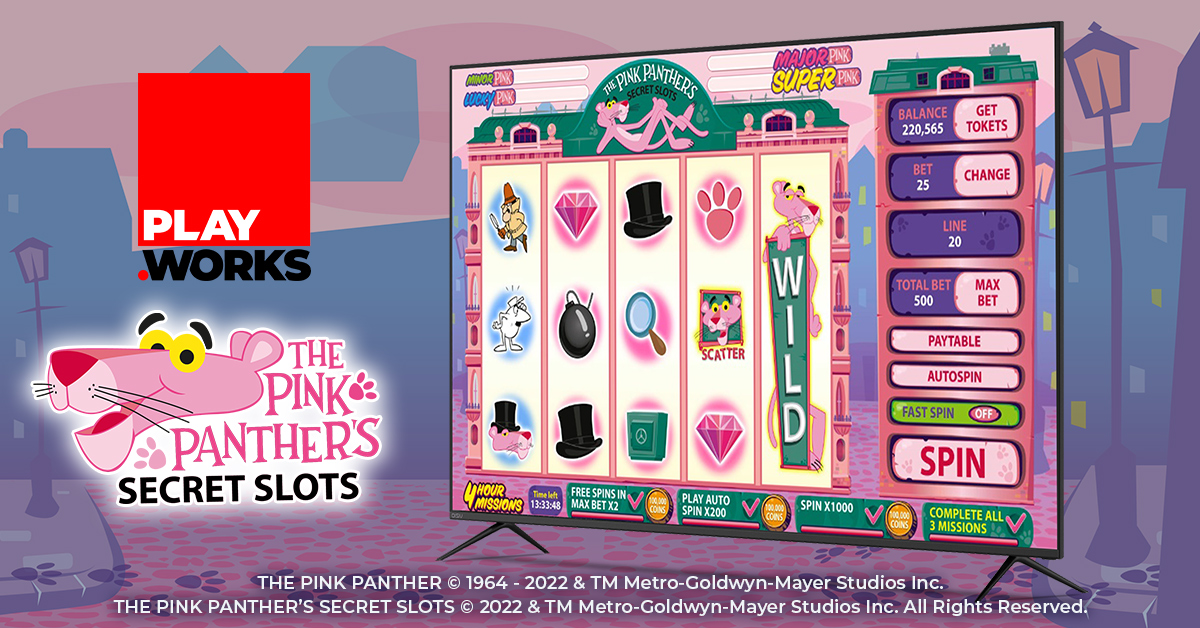 “The Pink Panther's Secret Slots” Launching Today is Second Game Created by Play.Works Based on the Iconic Pink Panther

February 16, 2022- Metro Goldwyn Mayer (MGM), a leading entertainment company focused on the production of premium film and television content across platforms, and Play.Works, a leading Connected TV Influencer Video and Games Network, unveiled today that its new The Pink Panther’s Secret Slots game is now available through connected television devices. The game is available to play through the Play.Works Network, which reaches over 200 million homes and has the largest Connected TV games catalog in the world. It is the second of three titles being developed around the iconic character, with Pink Panther Time Traveler launching in 2021.

Play.Works developed and built The Pink Panther's Secret Slots game from the ground-up for TV, and it will be available on leading platforms such as Roku and FireTV. Connected TV streaming devices remain the most-used way for viewers to watch online videos and Play.Works is leveraging this growing trend by creating games for these devices to give players the optimum viewing experience through a suite of easy-to play and highly engaging games.

Robert Marick, Executive Vice President, MGM Global Consumer Products & Experiences said, “We are thrilled to continue to grow our relationship with our friends at Play.Works through the launch of The Pink Panther’s Secret Slots, and look forward to engaging Pink Panther fans both old and new with this exciting collaboration.”

“Connected TV has arrived and games on Connected TV are powered by Play.Works! We are thrilled to the launch The Pink Panther’s Secret Slots game on the exploding Connected TV platform” said Jonathan Boltax, CEO of Play.Works.

MGM’s iconic character, Pink Panther, debuted in the front and end credits of the legendary detective series of the same name more than 50 years ago. Its popularity spawned TV series, specials, comics, and merchandise. Pink Panther continues to be discovered by new generations and remains one of MGM’s most well-known franchises due to its captivating charm that appeals to all ages.

Metro Goldwyn Mayer (MGM) is a leading entertainment company focused on the production and global distribution of film and television content across all platforms. The company owns one of the world’s deepest libraries of premium film and television content as well as the premium pay television network EPIX, which is available throughout the U.S. via cable, satellite, telco and digital distributors. In addition, MGM has investments in numerous other television channels, digital platforms, and interactive ventures and is producing premium short-form content for distribution. For more information, visit www.mgm.com.

Connected TV has arrived and games on Connected TV are powered by Play.Works. Play.Works is the leading games platform distributed through connected devices. Founded by interactive television pioneer Jonathan Boltax, Play.Works boasts the largest games OTT game catalog in the world with over 400+ titles. Play.Works also leverages their proprietary connected device development framework that allows for rapid development across multiple Connected TV platforms to publish and distribute over 100 AVOD apps. Play.Works games and AVOD apps can be found on world leading players such as Comcast, SKY, Roku, Vizio, LG, Samsung and more with a combined reach of over 250M homes.